With intense winter weather pretty much all across the US in the past few weeks, it’s easy to get in winter hibernation mode. But not us at OM! Instead we’re gearing up to do some great things in March. In fact, we’re doing things that are SO great that we’re calling it March Madness and the goal is to raise $25k by March 31st. Sheer madness you may say? Nope… we know we can do it, but we need the help of other great people to reach our goal (as is true for many things in life!) so we’ve started the March Madness fundraising campaign on Crowdrise, an online community that helps pull people together to start projects that all help reach a common goal for non-profit organizations. We need to raise $25k to get our Guide Program up and running on a new online platform that will better match Guides and Travelers, which is one of our main goals at OM – so of course we want to be GOOOOOOD at it!
On our March Madness Crowdrise event, there are many options. First, you can donate directly to the overall campaign. Second, you can create your own project to help raise money for March Madness, and ultimately Outdoor Mindset. Third, you can join other people’s projects, and become part of their team if you like what they’re doing and want to do the same thing. 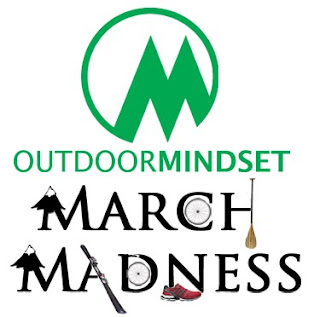 We already have some AWESOME projects up there. Tony Stafford, a friend of Outdoor Mindset and founder of Boulder Sports Performance (which helps other athletes train to reach their ultimate fitness goals) is trying to break the World Record for the fastest marathon while wearing a 40 pound pack at the Baatan Memorial Death March. MADNESS!!! A group of OM’ers and some friends are doing a Moab Adventure race that includes at 275 foot rappel off a cliff. CRAZY! Kellyn and I are going to run a 5k or 10k… ok that sounds a little more calm and reasonable, but still, we’re doing it for OM and showing that we’re getting outdoors and getting active in March and it’s all for Outdoor Mindset. If all else fails, you should at least donate the money you win from your NCAA March Madness tournament bracket to Outdoor Mindset. All you had to do was drink beer, watch TV, and make educated guesses to win that… I’m just sayin’. 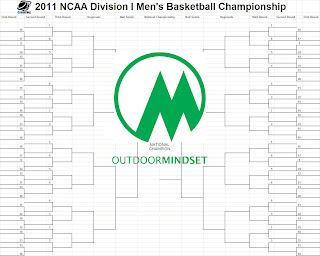 So here’s to raising $25k by March 31st and loving every second of the process: from getting outdoors, harassing our friends and family to donate, and putting it all towards the goal of connecting newly diagnosed individuals with someone else uniquely familiar to the neurological experience they’re going through. I’m sure you’ll be hearing from us soon, so just go ahead and pass the word along now.

Let’s make this 2011 March Madness campaign as cool as this highlight video from the 2010 NCAA Tourney. Now help us 'WIN'! (I especially like those MSU clips...)