Still in the Game


Greetings Outdoor Mindset friends - I hope you all had a fabulous weekend!
Everyone always needs a bit of inspiration on Mondays, and I have just the story for you. Today we have a guest blog from Outdoor Mindset Member Don, who is an avid lover of the outdoors and the sport of hunting.  Don also has debilitating Multiple Sclerosis. Don's attitude, similar to that of Outdoor Mindset's, is that nothing is going to stop him from doing what he loves, and he's broken down many barriers and hurdles to make that happen. I love the title Don has given his blog - Still in the Game - because that's exactly what he is... still in the game, and a major player at that! Don't ever forget that you are ALL (neuro challenge or not!) always still in the game, and take strides to make sure you are a major player, just like Don.


Still in the Game
It's been several years since I've put together my story so when I was asked by my new friends at Outdoor Mindset to write something up for their blog, it took more serious thought than I expected. I do my best pondering in the woods so I'll head out to a little strip of high ground between our food plot and a pond. That's where I'll begin my tale. 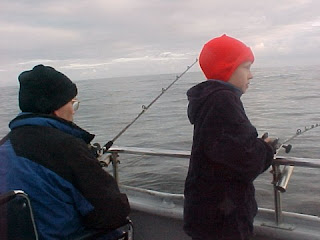 As I absorbed the peace that is so often my companion when I'm in the outdoors, my thoughts turned to the road I've traveled to get to this point in my life. A person never knows which way the path will lead. We encounter many forks along the way, some of which lead to good stuff, some bad. Either way we live, learn, and move forward. Sometimes the path is smooth but often it's just plain rough and feels uphill all the way.

Finding out you have a serious illness makes a pretty nasty bump in the road. Living with the progression of that illness is rough. When we are faced with something like that, a person has two choices. We can either give up and crawl under a rock or we can play the hand we are dealt. I choose to play.

My struggle with a physical disability started in 1996 when I was diagnosed with multiple sclerosis. My world was shaken. Suddenly my future was uncertain. I was 31 years old with a growing family and a solid career path teaching and counseling that I truly enjoyed. Thinking back, there really was no choice. It simply needed to be faced and that was that. My wife Leann and I waged a silent battle against the disease for some reason not wanting to burden any family or friends unless we absolutely needed to. That time came all too soon and by 2004, I could no longer function well enough in my job and needed to go on disability. My mind was fine but I was down to one usable leg and one arm. Combine that with dizziness and fatigue and I wasn't doing my students much good anymore. 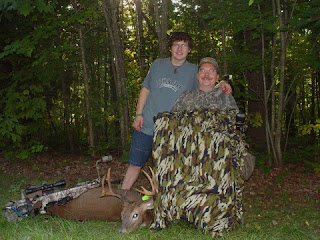 Going on disability felt like giving in but there were no other options. Thankfully I had some time to prepare things so I could still be in the woods and not trapped in the house! Still… I needed some serious soul-searching to find a new direction. I began to help Steve, a buddy of mine who worked for Babe Winkelman Productions. Babe helped me get started with voice-recognition software and I communicated with folks calling in looking for information about hunting and fishing opportunities around the world. I
would put them in touch with outfitters who could offer the services they were looking for. Interesting work and I met lots of great people but I knew it wasn't the direction I was meant for.

I was visiting with Steve and he made an interesting suggestion. He said that since I was already researching ways to stay in the woods or on the water maybe I should use my computer knowledge and find a way to share that information with others. I asked him to tell me more and he suggested I build a website to share some of my information. He said "you can't do things the way you used to but what you do is a far cry from sitting on the couch watching hunting shows and wishing"

At that time, information about the outdoors for someone with a disability was all but impossible to find. My wife and I sat down together and figured out how to put the information I had gathered for myself in a format that others could use. It wasn't long before we had a small working website named afarcry.info with some basic tips and tricks I had found to be useful. One thing led to another and the site grew almost faster than I could keep up. I'd research things and talk with outfitters during the day and my wife would get home from work and we would add them to the site. Soon it was all I could do to keep up with the calls and e-mails but I was loving it. I had a direction and was doing some good!

Meanwhile, MS was taking its toll on my body. I kept losing ground and wasn't far from being bedridden when the drug Tysabri became available. It was risky because the main side effect was death but the alternative was spending the rest of my life in bed. I couldn't do that as long as there was any option at all. I took the chance and never looked back. So far so good and it's been about six years as I write this story. 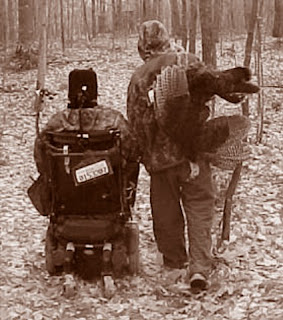 As always, there are good days and bad days. I always used to tell people that I would hunt as long as I can pull the trigger. When that day came and my hand could no longer squeeze hard enough, it hit me hard. I came back to the house feeling about as sorry for myself as was possible. Imagine how pleased I was when I got my first sip and puff trigger and could do it with my mouth! It's been five seasons now in which I harvested my deer without lifting my hands from my armrests.

That gives you an idea where I'm at. I am a quadriplegic so things are different than they were when I was able bodied but I've become so much more than I ever was before. I can’t walk but I can and do have a positive impact on so many people. I firmly believe the quote "that which does not kill us only serves to make us stronger". What happened to me could happen to anybody. Whether it be an accident, illness, or other catastrophe, the issue is not what happens to us but what we do with it. If you are new to the game, come on in, and we'll make the most of life together!


Is that just the dose of inspiration you needed on a Monday? Now get out there, get involved, and get cranking on something awesome.

Hold on to your seats!

Like I said in my last blogpost: We have a lot going on at Outdoor Mindset right now… and that’s an understatement. But probably the most exciting of all is the fact that we’ve hired a part time Director of Programs and Membership to help manage and develop our programs. And well, she is awesome (again, definitely an understatement!) Patti comes to us with years of valuable non-profit experience, and above all, a passion and excitement to nurture and develop non-profits with great programs and potential – like Outdoor Mindset! So here’s a little shout out from Patti herself, giving you some insight about who she is, and what’s to come with her involvement with OM. 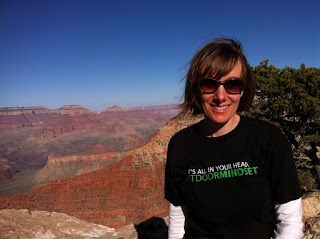 A few hours before Kyle called to offer me this position, I was practicing yoga next to a woman in her 70’s who has Parkinson’s disease and I noticed that as the class progressed, her hands calmed and the trembling slowed. She has a beautiful practice: soft, gentle eyes and strong, graceful poses. We started talking after the class ended and she told me that she was headed to a retreat at Shoshoni in Rollinsville, CO the following weekend. I could tell that it took courage for her to sign up for the retreat. “I drove up there by myself to see it, I didn’t know if I’d get lost on the way, or if I’d even find it,navigating the back roads, but I did and I love it; it’s a beautiful place.”
What touched and inspired me the most about hearing her plans, was that she was pushing herself to find new experiences; to live her life. She found something that she was curious about and created an adventure for herself. Hearing her story reminded me of how important that is for all of us. To me, that’s what Outdoor Mindset is all about: people connecting and inspiring each other to continue living their dreams. Or, as the Outdoor Mindset team would say, to Live Big!
I’m three weeks into my new position as the director of programs and membership and am so impressed with the incredible job that the board and volunteers have done of laying the groundwork for a successful organization. They are a dynamic, engaged group with a wide variety of professional skills and they are passionate about Outdoor Mindset’s mission. I’ve worked and volunteered in the nonprofit sector for over 15 years. One of the positions that I found to be very fulfilling was as the executive director of the Rocky Mountain Chapter of the ALS Association. While working with people with ALS (Lou Gehrig’s Disease), one of the things that I found to be the most disconcerting was the number of people who found themselves isolated because they didn’t have the support to get out and stay active. Many seemed to cut back on activity long before it was necessary. When I saw the job announcement for this position, I thought to myself, what a great idea for a nonprofit! I’m looking forward to working hard to make this organization more visible and to developing its programs so that we’re able to increase the quality of life for those suffering from neurological disorders. I love to hear from our members, please call or email me and introduce yourself!
-Patti
See, I told you she's awesome! So hold on to your seats people, because with the addition of Patti and our dedicated Board of Directors and Volunteers driving this bus, we’re all in for a wild ride!
One great thing we’ve already put together is this fabulous (you can saw 'fabulous' on a Friday and it's ok, right?) video showcasing what Outdoor Mindset is all about. Check it out and share it with your friends, family, pets, co-workers, waiters and waitresses, and anyone else who will watch. :)
HAPPY FRIDAY! We hope you are all as excited as we are about the great things going on with OM!
Living Big in Bozeman now,
Jill
Posted by Jill at 3:10 PM No comments: