A Journey Worth Traveling - Ann Nicocelli

Today we have a guest blog from Ann Nicocelli, an Outdoor Mindset Member in Washington DC who does not believe in limits. Ann was diagnosed with a brain aneurysm and had brain surgery just over a year ago. She is a dedicated athlete, mother, and lover of the outdoors and she has not let her diagnosis define or limit her throughout her journey. She has worked back to amazing strengths after surgery (back at 200% she says!) and continues to compete in triathlons. She is an inspiration to us all. 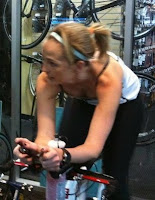 Building Back Better:
The memories after surgery of relearning to walk up stairs with a physical therapist are very recent. I made the decision to focus on endurance training because it not only made me happy, I felt like it was the best way to put the fatigue and post surgical healing behind me. It is important to know that after surgery, your brain can heal. Surgery is a traumatic process. There is an evolution that you and your brain will go through of reconnecting. It is actually a beautiful thing to experience. The healing power of the brain is inexplicable in words.
Although I worked out right up to the day before surgery, I suffered a significant loss of strength and endurance through this process. This is typical. My upper body strength disappeared. Under doctor’s orders, I was not allowed to lift anything heavier than a milk carton for 3 months. I went from being able to comfortably perform full push-ups before surgery to not even being able to do one push-up on my knees after surgery. In addition, after the surgery my ability was depleted to the point of not being able to swim 10 meters in a pool or run half a block without being winded. (This is rather traumatic to a self described triathlete!)
I have had a lot of "first's" since surgery...the first time I walked again, the first time I ran, the first time I put a bike helmet back on my head (ouch!), my first triathlon, and so much more. In retrospect, I have learned a lot and healed in a way that has been better than I could have imagined...admittedly fighting every day to build back stronger. I have kept a journal which tracks my daily developments. It also tracks the fun, comical stories like when I went into the bike store a week after I arrived home from the hospital - yes, the true sign of a diehard gear geek! I still had 28 staples in my head and thought it might be the only place I could go and not be stared at...and maybe even be cool if they thought the staples were from a bike jump. I also decided at that point that I could have had the best costume and should have scheduled surgery closer to Halloween. I digress...
Severe fatigue post surgery is common. For me multisport training was a way to look straight in the face of it all and say “that is not going to be me.” Twelve days after the operation, I went for my first run and have been training ever since. I ran a 10k thirteen weeks after surgery in just less than an hour. Completing the race was a triumph. I used this run to qualify for the National Half Marathon in Washington, DC. My first triathlon was Columbia International Tri (1.5k Swim – 41k Bike – 10k Run) on May 22. I raced this with my surgeons Drs. Coon and Geoffrey Colby, also known as A1 and G6 when they are ripping up the roads. I also raced the Luray International Tri, the same distance, on August 13. This was a huge victory as this was a race I had cancelled a year ago to prep for surgery. Yesterday morning (September 11) I raced the Nations Tri in Washington, DC. The swim was cancelled due to flooding, but it was still a great bike and run! It felt awesome to join the two races that I had cancelled last year. In a way it became closure on a year of building back. I can now think big in a new way and define my race schedule based on what will be fun and where I want to take multisport training moving forward.

Healing is an arduous process. There are challenging days and easier ones. You realize there are times in your life when you need to ask a lot of your body. It is so clear to me now that your body can only respond at the level that you take care of it. I am now having fun indulging myself, pushing the athlete in me forward, and seeing what my body and mind can do. I feel stronger, more focused and self realized than when I went into surgery and it is invigorating. Training for me used to be just a way to stay healthy. It has now become an integral part of my life.
CycleLife invited me to join their tri team. The team environment provides tremendous support and our team is a fabulous group of athletes. I spend more time now focused on my nutrition and recovery in between workouts. It has made all the difference in my overall quality of life. I am looking forward to adding cycling and running races to the calendar to supplement the tri's. This will all be coordinated with Steve Dolge, my ever supportive coach.
Life After Brain Surgery:
It would be cliche to say that my life has gone back to normal. There really is no such thing. I am back to being a dedicated mom, to working in the international corporate world, to enjoying time with family and friends, and to living an active, athletic lifestyle. I have been medication free since a week after surgery and I enjoy a life with a sweetness, beauty and calm that comes from facing your own mortality in such an intimate way. There are daily challenges that life brings that now seem easier to put into perspective.
I am proud of being a brain aneurysm survivor, thankful for my wonderful medical team, family and friends, and excited for the future that has been given to me. That precious box that holds the meaning of life has been opened, and I will treasure it every moment.
My connection to the outdoors and endurance training has made me heal faster, stronger, and in a more well rounded way than I could have ever imagined. If you have brain surgery on the horizon, from my heart, I wish you all the very best. A friend who is a cancer survivor told me that this process would make me a warrior. It will do the same for you. You are stronger than you realize, make sure you smile and even laugh a little - or even a lot, and know that many others are with you.
- Ann Nicocelli
WOW - talk about an amazing story!
Stay tuned because later this week we'll be posting 20 things Ann has learned from surgery, and what she wishes she had know before surgery.
Happy Monday!
Jill
Posted by Jill at 7:30 AM